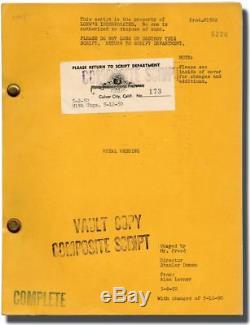 Description: Revised Composite script for the 1951 film. Two front wrappers present, one with the script department receipt intact, both noting changes (dated 5-12-50) to the script. Tom and Ellen Bowen (Astaire and Powell) are siblings with a dance act in New York. Their agent books them a gig in London while the Royal Wedding is in progress. On their cruise to England, Ellen meets Lord John Brindale (Lawford), and she misses rehearsal.

Upon arriving, Tom holds auditions for dance partners and meets Anne (Churchill). The siblings are at arms defending their romances, and trying to keep their dance act stable. Loosely based on the real-life dancing partners, Fred Astaire and his sister, Adele. Shot on location in England and California. Goldenrod titled wrappers, with two front wrappers present as issued, both rubber stamped COMPOSITE SCRIPT on the front wrapper, and copy No. 173 on the white studio label, dated 5-2-50, with "changes of 5-12-50, " and credits for director Donen, producer Freed, and screenwriter Lerner.

Distribution receipt present on the second goldenrod wrapper. 153 leaves, mimeograph, with pink revision pages throughout, dated variously between 5-2-50 and 8-2-50.

The item "Stanley Donen ROYAL WEDDING Original screenplay for the 1951 film 1950 #128821" is in sale since Saturday, March 9, 2019. This item is in the category "Entertainment Memorabilia\Movie Memorabilia\Scripts\Originals\Unsigned".