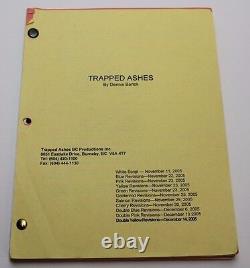 Script Dated: December 14, 2005. This is an original movie script from the 2006 Cult Horror film, Trapped Ashes.

It has multi-colored revision pages throughout the script. It is 96 pages long. Please view the pictures above. This script is very rare, it's an awesome piece of movie memorabilia.

The actress Phoebe Kane and her boyfriend Andy, the architect Henry and his wife Julia, the former director Leo and Nathalie receive an invitation for a VIP Tour in the Ultra Studios. When they see the spooky house where the missing director Desmond Hacker filmed "Hysteria", they ask their tour guide to stop the car to visit the infamous house. In a moment, they find that they are trapped in a room without any exit and the guide suggests them to tell the scariest experience of each one like in "Hysteria". Each one tells a spooky tale until they finally discover the end of their stories. POSTER IS NOT INCLUDED, IT IS JUST BEING USED AS A VISUAL REFERENCE.