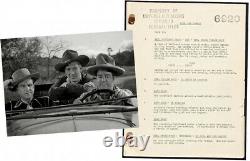 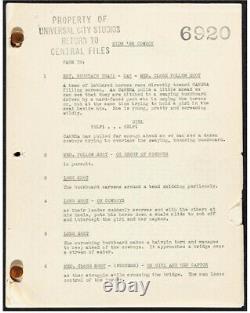 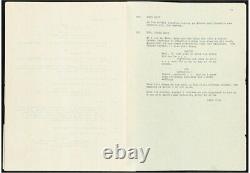 Starring Bud Abbott & Lou Costello. Introducing this piece of genuine Hollywood History, this Original Vintage Movie Script for this 1941 Abbott & Costello comedy classic "Ride'Em Cowboy".. Any original movie paper or posters for this film is Very Scarce, most likely due to 99% of it being donated and destroyed for the WW2 paper drive efforts. And this is the FIRST Original script for this title we've ever seen in our 40 + years collecting.

(Note: We also have a RARE Original script for the 194 Abbott & Costello classic "In the Navy") Ride'Em Cowboy by True Boardman (Universal, 1941). Final Draft Script (77 Pages, 8.5" X 11"). After getting in trouble at a rodeo show, two peanut vendors high-tail it out of town on the rail, getting jobs as cowboys with no experience whatsoever! This was the last collaboration between director Arthur Lubin and Abbott and Costello, which became another blockbuster box office success for the comedic duo! Starring Bud Abbott, Lou Costello, Dick Foran, Johnny Mack Brown, Anne Gwynne, The Merry Macs, and Ella Fitzgerald.

An unrestored script with bright color and a clean overall appearance. It may have general signs of use, such as slight edge wear, corner bends, creases, tears, some paper loss on pages, and pencil marks for edits, re-writes, and notations. There are three punched holes to the left side of the script with two brass fasteners attached. This item is in the category "Entertainment Memorabilia\Movie Memorabilia\Scripts\Originals\Unsigned". The seller is "cvtreasures" and is located in this country: US. This item can be shipped to United States, China, Japan, Brazil.