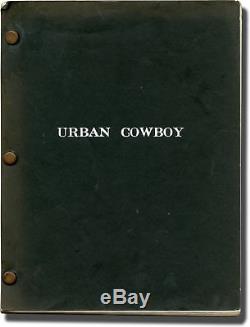 Description: Final Draft script for the 1980 film. A shining credit for John Travolta, based on an article in Esquire magazine (1978) by Aaron Latham.

A country boy moves to the city to take a job with his uncle, meets a cowgirl and the two fall in love, and eventually get married. Another man threatens their relationship, but if Travolta can master a mechanical bull, all will work out in the end.

Set in Houston, Texas, shot on location throughout Texas. Title page present, dated May 7, 1979, noted as FINAL DRAFT, with credits for screenwriters Latham and Bridges.

The item "James Bridges URBAN COWBOY Original screenplay for the 1980 film 1979 #136454" is in sale since Monday, April 8, 2019. This item is in the category "Entertainment Memorabilia\Movie Memorabilia\Scripts\Originals\Unsigned".