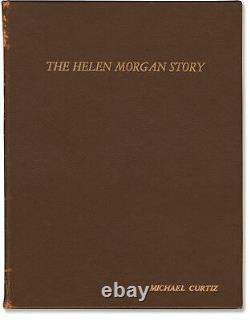 This film marked Curtiz's return to Warner Bros since leaving in 1954 due to a salary dispute. Ever since Morgan's death Warner Bros wanted to make a film biography though struggled to find an actress and continuously in development. Working titles included, Why Was I Born? " "Both Ends of the Candle" and as printed in this copy, "The Jazz Age. Many female actresses auditioned including Doris Day who rejected due to her squeaky clean image.

Blyth was chosen for her dramatic ability even though her singing voice was akin to Morgan's. Gogi Grant would supply the singing voice dubbed over Blyth. Set in New York, shot on location in Burbank, CA.