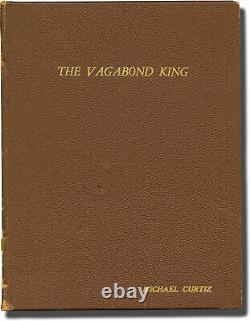 Title page present, dated December 9, 1954, with credits for producer Pat Duggan, director Michael Curtiz, screenwriter Ken Englund. 114 leaves, with last page of text numbered 96A. Mimeograph duplication, with blue and goldenrod revision pages throughout, dated variously between 12-15-54 and 2-9-55. Pages Near Fine, binding Very Good plus with some wear at the edges.