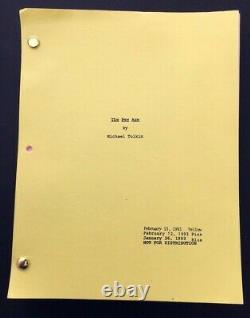 Original Movie Script "The New Age" 1993. The New Age, original movie s cript by Michael Tolkin, Yellow copy, February 15, 1993, over 140 white, blue, pink and yellow pages even though the last page is numbered 121 with revisions dated January 26, February 4, 12, and 15, bound with a yellow front cover that also serves as a title page, in very good condition (a few pages are creased from storage). The January 26 pages are listed as blue on the front cover but are actually white.

The unlisted February 4 revisions are printed on blue paper. The New Age starred Peter Weller and Judy Davis as a married couple who slept around to satisfy their sexual desires.

In the movie they go from one encounter to another and interact with a host of well-known actors such as Adam West, Patricia Heaton, Samuel L. Jackson, Corbin Bernsen, Rachel Rosenthal, and Paula Marshall. Vendio Images: More than just a pretty image. 250+ Mobile Responsive & Active Content Free Listing Templates with Vendio Sales Manager. Get business information that counts! - Vendio Counters are active content free. This item is in the category "Entertainment Memorabilia\Movie Memorabilia\Scripts\Originals\Unsigned". The seller is "member48920" and is located in this country: US. This item can be shipped to United States.