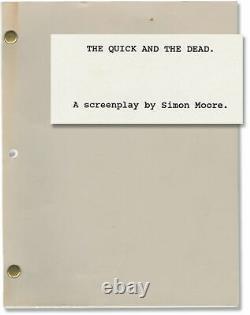 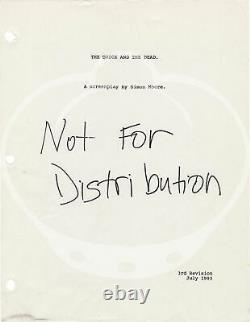 Sam Raimi's exuberant homage to the spaghetti western, criminally underrated at the time of its release, it has since been reassessed, a unique and finely crafted revisionist Western. Featuring memorable performances all around, including Russell Crowe's first US film role, and an up-and-coming Leonardo Di Caprio.

A woman gunfighter, "The Lady" (Sharon Stone), rides into the town of Redemption, run by the ruthless outlaw John Herod (Gene Hackman), to participate in a deadly quick draw elimination tournament with 15 other gunfighters, and to exact revenge. Set in the fictional town of Redemption, shot on location in Arizona. Title page present, dated July 1993, noted as 3red Revision, with credits for screenwriter Simon Moore. 107 leaves, with last page of text numbered 106. Pages Near Fine, wrapper Near Fine with some toning and splashing, bound with two gold brads. Subject: 1910s Cinema, Action Film, Directors, Film Scripts, Romance, Western, Women's Interest. Royal Books is located in the midtown area of Baltimore, Maryland. Since 1996, we have specialized in rare books and paper relating to twentieth century literature, genre fiction, the arts, and popular culture, with a particular emphasis on cinema.