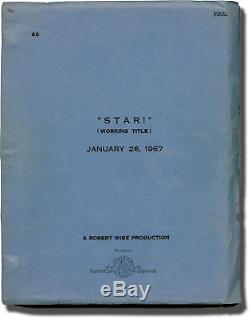 Julie Andrews stars in this biopic, about the onstage and offstage life of actress Gertrude Lawrence. 185 sets were built for the film, featuring extravagant musical production numbers with Andrews acting, singing, and dancing. Blue titled wrappers, noted as Final on the front wrapper, production No. 65, dated January 26, 1967.

The item "STAR Original screenplay for the 1968 film signed by director Robert #128866" is in sale since Thursday, February 7, 2019. This item is in the category "Entertainment Memorabilia\Movie Memorabilia\Scripts\Originals\Signed". The seller is "vanburenantiques" and is located in Baltimore, Maryland. This item can be shipped worldwide.