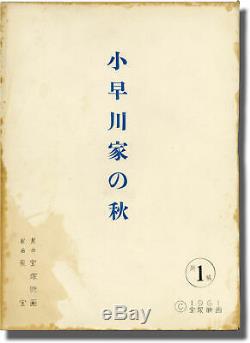 Working copy belonging to uncredited crew member Takahashi Toshihiro, with his name rubber stamped on the first leaf and the last page of text. Director Yusjiro Ozu's penultimate film, about a widower and his daughters, who become concerned when he begins visiting an old flame, while also trying to find husbands for his youngest daughter and widowed daughter-in-law. White titled wrappers, noted as 1 on the front wrapper, dated 1961. 52 leaves, with last page of text numbered d-26. Pages Near Fine, wrapper Very Good with some slight foxing.

Criterion Collection Eclipse Series 3. Subject: 1960s Cinema, Film Scripts, Japanese Cinema. Royal Books is located in the midtown area of Baltimore, Maryland. Since 1996, we have specialized in rare books and paper relating to twentieth century literature, genre fiction, the arts, and popular culture, with a particular emphasis on cinema.

All books noted as First Editions are also First Printings unless indicated otherwise. This listing was created by Bibliopolis. The item "Yasujiro Ozu END OF SUMMER Original screenplay for the 1961 film #143276" is in sale since Tuesday, March 12, 2019. This item is in the category "Entertainment Memorabilia\Movie Memorabilia\Scripts\Originals\Unsigned". The seller is "vanburenantiques" and is located in Baltimore, Maryland. This item can be shipped worldwide.