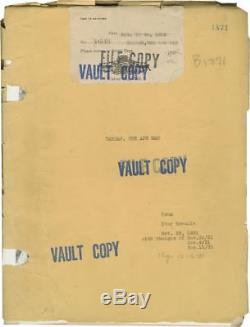 Description: Draft script for the 1932 film, based loosely on Edgar Rice Burroughs' novel Tarzan of the Apes. Two black and white reference photographs for the film also laid in. The first of Weissmuller's twelve Tarzan films, and the first appearance of Cheeta, Tarzan's chimpanzee friend. In this variation of the much-adapted Burroughs tale Tarzan and Jane fall in love, and although Jane desires to take him back to England, when Jane's father James Parker dies on the expedition Jane remains behind in the jungle instead. Set in Africa, shot on location in California and Florida.

Pale yellow titled wrappers, rubber-stamped VAULT COPY and FILE COPY on the front wrapper, and rubber-stamped copy No. 11/31, with credits for screenwriter Novello. Title page not present as issued.

Photos both 8.25 x 10 inches, Fine condition. Subject: Adventure, Film Scripts, Films with Literary Sources. Royal Books is located in the midtown area of Baltimore, Maryland. Since 1996, we have specialized in rare books and paper relating to twentieth century literature, genre fiction, the arts, and popular culture, with a particular emphasis on cinema. All books noted as First Editions are also First Printings unless indicated otherwise. This listing was created by Bibliopolis. Van Dyke TARZAN THE APE MAN Original screenplay for the 1932 film #134294" is in sale since Thursday, February 7, 2019. This item is in the category "Entertainment Memorabilia\Movie Memorabilia\Scripts\Originals\Unsigned". The seller is "vanburenantiques" and is located in Baltimore, Maryland.