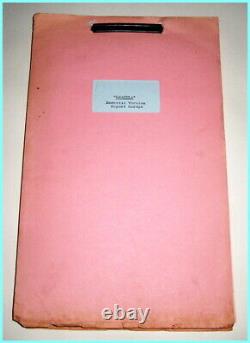 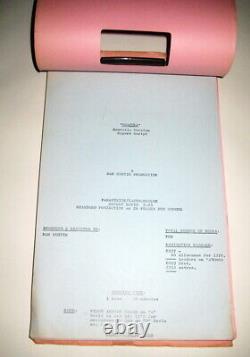 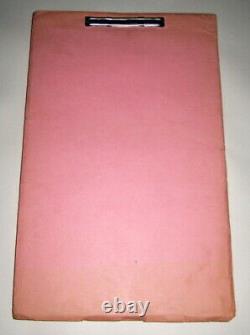 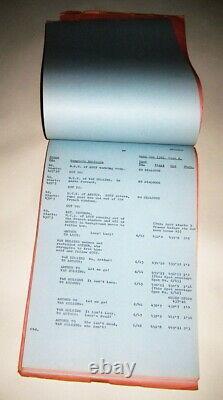 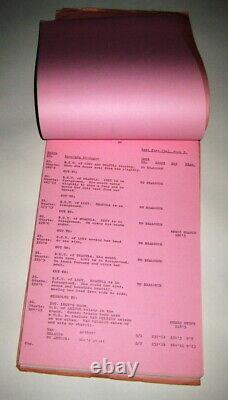 Over time, this rare & magnificent work of art will substantially increase in value and become a very prudent investment! 1974 - VERY Rare Original TV Post Production Script. NOW YOU CAN FINALLY OWN THIS RARE SCRIPT! Very Rare and 100% Vintage Original.

Their increasing value is dictated by the astute collectors. To the movie theatres, they were garbage! Once the "film run" was over they were thrown away to make room for the next movie that was shown in those movie theatres.

Today, these highly collectible posters are impossible to find anymore in such excellent condition! So go ahead, Do NOT Wait Much Longer!

General light wear on the front and back covers, especially at the bottom edge and where the metal clip is. Title page has slight discoloration at the bottom, but is in good shape. It was the second collaboration for Curtis and Palance after the TV film. The Strange Case of Dr.

This rare script will make a superlative addition to your growing collection! An extremely rare and un-restored.

Every item is accurately described, with un-retouched high resolution images. Our consignors rates are also very low which (through word of mouth) has transformed. KISS ME MONSTER into one of the most trusted online sources for rare movie memorabilia & other unique collectibles. KISS ME MONSTER was originally founded in 1966 by 2 collectors (still with our company today) working from a small garage in Queens, New York.

Our descriptions are very accurate and 1st Class Customer Service has always been our Main Priority! We have NO intention of keeping you waiting for an extended time period. Trained to securely package your valuable items & collectibles to avoid any damage during transit. If by chance, you want to use a different carrier (UPS, Fed Ex, DHL). The SECRET To Our Phenomenal Success..

Our staff will respond immediately to every concern & inquiry. We view everything from the customer's perspective, precisely in the manner any of us would expect to be treated.

Our entire team (including myself) wants to make 100% certain you have a superlative, fun and very rewarding shopping experience! We know for a fact you'll definitely appreciate a speedy and detailed reply. Therefore, we understand the new shift in this current market really well and always strive to be extremely accurate when providing specific details and describing the overall condition for each unique collectible that we list here. In the coming weeks & months ahead, we will continue to bring you unique products and exclusive collectibles plus fresh ideas from our ever-changing modern world. In The Meantime, We Invite You To Join Us On This Amazing And Trend Setting Journey. We look forward to hearing from you shortly. Once again, we thank you very much for your continued support.

The item "1974 Dan Curtis' TV Movie DRACULA Very Rare Original Post Production Script" is in sale since Saturday, October 17, 2020. This item is in the category "Entertainment Memorabilia\Movie Memorabilia\Scripts\Originals\Unsigned". The seller is "kiss_me_monster" and is located in Jamaica, New York. This item can be shipped worldwide.