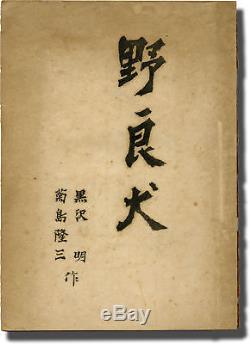 Description: First Draft script for the 1949 Japanese film noir. Holograph ink and pencil notations on two leaves. Generally considered to be the greatest film noir made in Japan, and hugely influential on American film noir of the 1950s and 1960s.

All books noted as First Editions are also First Printings unless indicated otherwise. This listing was created by Bibliopolis. The item "Akira Kurosawa STRAY DOG Original screenplay for the 1949 film First #143058" is in sale since Tuesday, January 8, 2019. This item is in the category "Entertainment Memorabilia\Movie Memorabilia\Scripts\Originals\Unsigned".