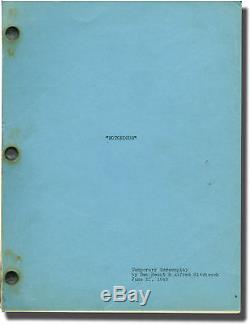 One of the great Hitchcock films, and one of a handful he made that ventured into more serious dramatic content outside the thriller genre. Though not credited as a screenwriter in the final film, Hitchcock and Hecht holed themselves up in a room in New York City for days developing the inital screenplay draft, this being the immediate result.

This listing was created by Bibliopolis. The item "Alfred Hitchcock NOTORIOUS Original screenplay for the 1946 film 1945 #131815" is in sale since Saturday, March 9, 2019. This item is in the category "Entertainment Memorabilia\Movie Memorabilia\Scripts\Originals\Unsigned". The seller is "vanburenantiques" and is located in Baltimore, Maryland.