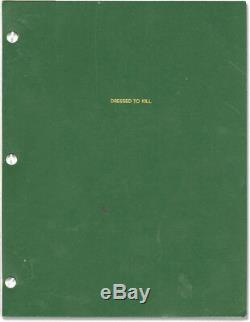 The De Palma film that essentially solidified the director's style, a mix of Hitchcock-esque suspense and intense sexuality. The film begins with a very famous update on the "Hitchcock shower scene, " with Angie Dickinson very plausibly filling Janet Leigh's role. The sixth of nine highly distinctive films De Palma made between 1973 and 1984. Green titled wrappers, stamped with the title in gilt on the front wrapper.

Title page present, with a credit for screenwriter De Palma and a date of 1979. Pages and wrapper easily Near Fine bound with three silver screw brads. Royal Books is located in the midtown area of Baltimore, Maryland. Since 1996, we have specialized in rare books and paper relating to twentieth century literature, genre fiction, the arts, and popular culture, with a particular emphasis on cinema.

All books noted as First Editions are also First Printings unless indicated otherwise. This listing was created by Bibliopolis. The item "Brian De Palma DRESSED TO KILL Original screenplay for the 1980 film #121671" is in sale since Wednesday, February 6, 2019.