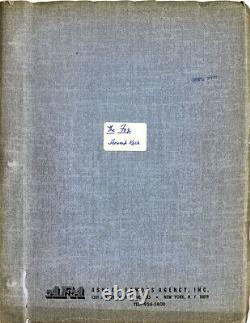 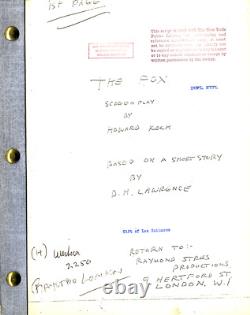 NEAR FINE in VERY GOOD wrappers, marginal tears to yapped edges, brad bound. Mark Rydell's summer-of-love film was adapted from D. Lawrence's 1922 novella of the same name, about a lesbian couple living on a rural farm, whose existence is disrupted by the arrival of a seaman whose grandfather used to own the farm. One of only a handful of US films to address the subject of lesbianism in the 1960s.

It must come back in the same condition as it was sent. AUTHENTICATION: My name is Walter Reuben. I have been collecting movie posters since 1978. I have been a full-time dealer since 1982.

Everything which I sell is fully researched and entirely guaranteed to be completely authentic and as described. A lifetime of experience goes behind every description of every piece which I offer. ABOUT ME: For further information, go to the ABOUT ME. This item is in the category "Entertainment Memorabilia\Movie Memorabilia\Scripts\Originals\Unsigned". The seller is "walterfilmusa" and is located in this country: US.