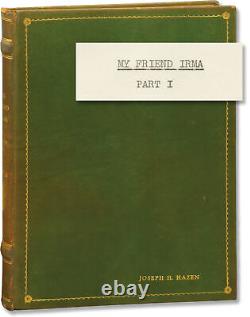 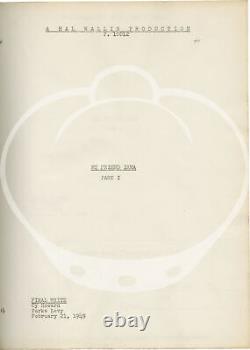 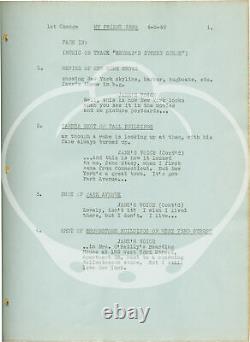 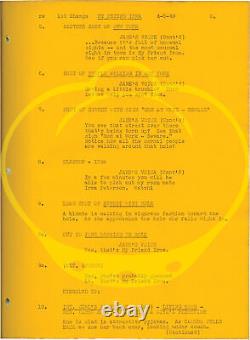 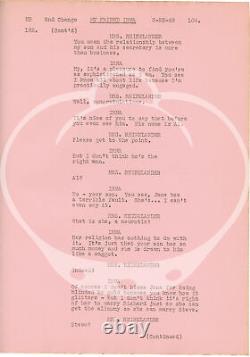 Description: Final White script for the 1949 film. Presentation copy belonging to producer Joseph H. Hazen, in full green leather binding, with his name in gilt on front board and title in gilt on spine, with the single annotation of an "H" in holograph pencil on the top right of the title page.

Although the title and registration pages identify the script as "Part I, " the script presented here is the complete Final White Draft. Hazen, though not credited as a producer on the film, was the co-founder of the film's production company, Wallis-Hazen, with Hal B. Wallis, the film's credited producer.

Based upon the long-running radio comedy series created by Cy Howard, which broadcast on CBS radio from April 11, 1947 to August 23, 1954. Well intentioned, but not so bright, Irma and her conniving layabout boyfriend Al, meddle in the love life of Irma's practical room mate Jane. The film debut of the nightclub comedy team of Dean Martin and Jerry Lewis. Lewis was originally cast to play Al, but was quickly realized to be wrong for the relatively straight role, and quickly invented the character Seymour as a comical sidekick to Steve (Martin), and was written into the film, already in production.

Set in and shot on location in New York. Bound in full green leather, with Joseph H. Hazen and rule in gilt on front wrapper and gilt title and rule on spine. Title page present, dated February 21, 1949, noted as FINAL WHITE, with credits for screenwriters Cy Howard and Parke Levy. Distribution page present, with receipt intact.

141 leaves, with last page of text numbered 131. Mimeograph duplication, rectos only, with blue, pink, and goldenrod revision pages throughout, dated variously between 2-24-49 and 4-8-49. Pages Near Fine, binding Very Good plus, with toning to the spine and rubbing to the crown and heel. Subject: 1940s Cinema, Comedy, Film Scripts, Music, New York, Presentation Scripts, Radio, Romance. Royal Books is located in the midtown area of Baltimore, Maryland.