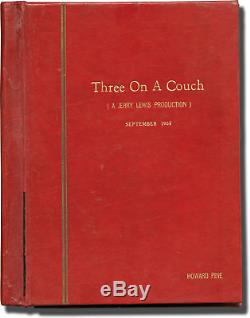 Always, Jerry on the front pastedown. Pine's working script, with notations in holograph ink and pencil throughout. Housed in a custom, leather bound spring binder (a first in our experience). Christopher Pride wants to take his girlfriend Dr. Elizabeth Acord on a trip to Paris for a year, where he wants to propose to her and live their honeymoon.

However, she is a psychiatrist and cannot bear to leave her three patients behind while she goes abroad. Turns out, each woman is dealing with problems following failed relationships with men, so without Acord's knowledge, Pride decides to "date" each of the women, acting as the men of their dreams in order to cure them in hopes of going on his vacation.

Blue titled wrappers, noted as Final White on the front wrapper, dated September 13, 1965, with credits for screenwriter Samuel Taylor, and producer-director Jerry Lewis. 127 leaves, with last page of text numbered 119. Mimeograph, with blue and yellow revision pages throughout, dated variously between August 30, 1965 and September 29, 1965. Pages Near Fine, wrapper Near Fine housed in a red spring binder.

Subject: 1960s Cinema, Comedy, Film Scripts, Romance. Royal Books is located in the midtown area of Baltimore, Maryland. Since 1996, we have specialized in rare books and paper relating to twentieth century literature, genre fiction, the arts, and popular culture, with a particular emphasis on cinema. All books noted as First Editions are also First Printings unless indicated otherwise.

This listing was created by Bibliopolis. The item "Jerry Lewis THREE ON COUCH Original screenplay for the 1966 film 1965 #140623" is in sale since Thursday, February 21, 2019. This item is in the category "Entertainment Memorabilia\Movie Memorabilia\Scripts\Originals\Unsigned".