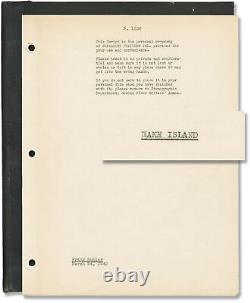 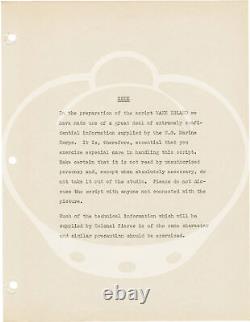 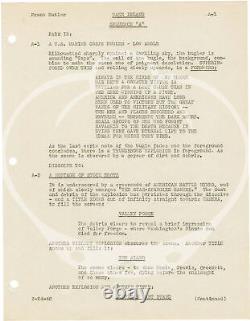 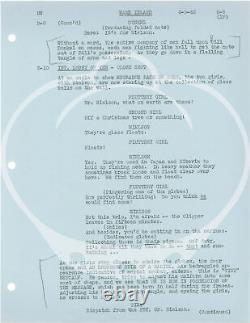 Final 25 pages bound separately, likely due to reports that multiple endings had been considered and filmed, due to the uncertain course of the war. Laid in following script are four blue revision pages. Housed in a black spring binder with two Property of Paramount Pictures Inc. Stamps on labels on verso of front board. Second page of script is a "Note" asserting the "extremely confidential information supplied by the US Marine Corps" in the script, emphasizing that it is not to be taken out of the studio unless absolutely necessary, nor is it to be read by or discussed with any unauthorized persons.

The script, written just a few months after the fall of Wake Island to Japanese forces, was based on official Marine records, then confidential, and was sent to the Marines for approval prior to filming. Based on the World War II Battle of Wake Island, which began hours after the attack on Pearl Harbor, and ended on December 23, 1941.

The first major Hollywood film on the US entry into WWII. US Marines, stationed on Wake Island, are suddenly attacked by overwhelming Japanese troops, and courageously stave off the enemy for as long as they can. Nominated for four Academy Awards, Best Picture, Best Director, Best Screenplay, and Best Supporting Actor for William Bendix. Shot on location in Salt Lake City, Utah and Coachella Valley, San Diego, and Salton Sea, California. Title page present, dated March 24, 1942, with credits for screenwriter Frank Butler. 124 leaves, with last page of text numbered D-45. Mimeograph duplication, rectos only, with blue revision pages throughout, dated 4-9-42, and laid in blue revision pages dated 4-25-42. Pages Near Fine, (unattached) wrapper Near Fine, bound with two gold brads, except final 25 pages, bound with staple to upper left.