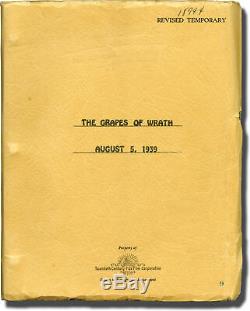 Description: Revised Temporary script for the 1940 film. Based on the 1939 novel by John Steinbeck.

The now-famed story of a suffering sharecropper family forced to relocate, John Ford's film adaptation stays true to the tone of Steinbeck's original, which was published only three months before producer Zanuck acquired the rights. The ending to the film varies significantly from that of the book, with Steinbeck's acknowledgment of the need for such a change. Winner of two Academy Awards and nominated for five others, including Best Picture.

Title page present, dated August 5, 1939, noted as Revised Temporary, with credits for screenwriter Nunnally Johnson and novelist John Steinbeck. 154 leaves, with last page of text numbered 148. Mimeograph, rectos only, with blue revision pages throughout, dated variously between 9/8/39 and 10/16/39. Pages Fine, wrapper Near Fine, bound internally with three gold brads. Scorsese, A Personal Journey Through American Movies. Subject: 1940s Cinema, Academy Awards, Directors, Film Scripts, Films with Literary Sources. Royal Books is located in the midtown area of Baltimore, Maryland. Since 1996, we have specialized in rare books and paper relating to twentieth century literature, genre fiction, the arts, and popular culture, with a particular emphasis on cinema. All books noted as First Editions are also First Printings unless indicated otherwise. This listing was created by Bibliopolis. The item "John Ford GRAPES OF WRATH Original screenplay for the 1940 film 1939 #145073" is in sale since Tuesday, March 12, 2019. This item is in the category "Entertainment Memorabilia\Movie Memorabilia\Scripts\Originals\Unsigned". The seller is "vanburenantiques" and is located in Baltimore, Maryland.