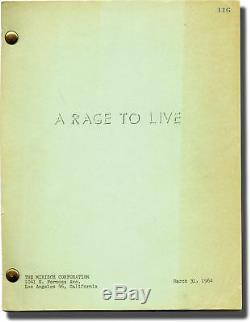 Description: Draft script for the 1965 film. A young woman, Grace Caldwell (Pleshette) is assaulted in her room as a teenager by her brother's friend, which leads her to become sexually compulsive the rest of her life. Nominated for an Academy Award. Pale green studio wrappers, rubber-stamped copy No. 116, dated March 31, 1964. Title page present, dated March 31, 1964, with credits for screenwriter Kelley and for writer O'Hara. Pages Near Fine, wrapper Near Fine, bound with two gold brads. Subject: 1960s Cinema, Academy Awards, Film Scripts, Films with Literary Sources, Women's Interest. Royal Books is located in the midtown area of Baltimore, Maryland.

Since 1996, we have specialized in rare books and paper relating to twentieth century literature, genre fiction, the arts, and popular culture, with a particular emphasis on cinema. All books noted as First Editions are also First Printings unless indicated otherwise. This listing was created by Bibliopolis. The item "John O'Hara RAGE TO LIVE Original screenplay for the 1965 film 1964 #129217" is in sale since Saturday, March 9, 2019. This item is in the category "Entertainment Memorabilia\Movie Memorabilia\Scripts\Originals\Unsigned".