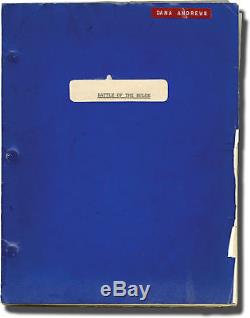 Script printed in Spain, where much of the film was shot on location, with English text. One of the most ambitious films about World War II made during the 1960s, an epic story that details the events leading to the title confrontation, the bloodiest battle that the US fought and one of the key turning points in the war.

Since 1996, we have specialized in rare books and paper relating to twentieth century literature, genre fiction, the arts, and popular culture, with a particular emphasis on cinema. All books noted as First Editions are also First Printings unless indicated otherwise. This listing was created by Bibliopolis. The item "Ken Annakin BATTLE OF THE BULGE Original screenplay for the 1965 film #137201" is in sale since Tuesday, January 8, 2019. This item is in the category "Entertainment Memorabilia\Movie Memorabilia\Scripts\Originals\Unsigned".