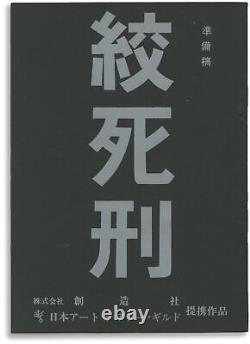 Loosely based on a 1958 crime and execution, and a rare (for its time) discussion of the discrimination faced by ethnic Koreans in Japanese society. Title page present, rubber-stamped copy No.

This listing was created by Bibliopolis. This item is in the category "Entertainment Memorabilia\Movie Memorabilia\Scripts\Originals\Unsigned". The seller is "royalbks" and is located in this country: US.