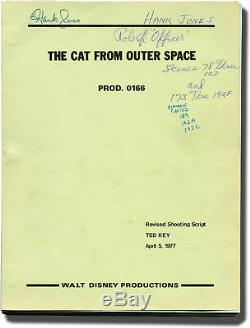 A catlike alien is stranded when its spaceship makes an emergency landing on Earth and it must seek the help of a government scientist in order to fix it, while also managing to evade capture. Norman Tokar's first project under his exclusive producer-director contract with Disney studios, and his final feature length film before his death in 1979 at the age of 59.

Shot on location in California. Green titled wrappers, noted as DRAFT on the front wrapper, noted as production No. 0166, dated April 5, 1977, with credits for screenwriter Ted Key.

Title page integral with the front wrapper, as issued. 152 leaves, with last page of text numbered 148. Mechanically reproduced, with pink, blue, yellow, and green revision pages throughout, dated variously between 4/22/77 and 5/13/77.

The item "Norman Tokar CAT FROM OUTER SPACE Original screenplay for the 1978 film #141923" is in sale since Tuesday, January 22, 2019. This item is in the category "Entertainment Memorabilia\Movie Memorabilia\Scripts\Originals\Unsigned".