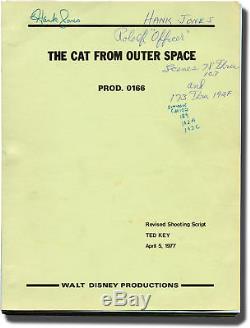 The Cat From Outer Space (Original screenplay for the 1978 film). Author: Tokar, Norman (director); Ted Key (screenwriter); Roddy McDowall, Harry Morgan, Hans Conried (starring) Title: The Cat From Outer Space (Original screenplay for the 1978 film) Publication: Burbank, CA: Walt Disney Productions, 1977. Description: Revised Shooting script for the 1978 film. Copy belonging to actor Hank Jones, who played a police officer in the film, with his name in blue holograph ink to the front wrapper and his notations throughout. Six pages of call sheets and production information laid in. Written by noted cartoonist Ted Key, best known for the long-running syndicated cartoon Hazel. A catlike alien is stranded when its spaceship makes an emergency landing on Earth and it must seek the help of a government scientist in order to fix it, while also managing to evade capture.

Norman Tokar's first project under his exclusive producer-director contract with Disney studios, and his final feature length film before his death in 1979 at the age of 59. Shot on location in California.

All books noted as First Editions are also First Printings unless indicated otherwise. This listing was created by Bibliopolis. The item "Norman Tokar CAT FROM OUTER SPACE Original screenplay for the 1978 film #141923" is in sale since Saturday, March 23, 2019.