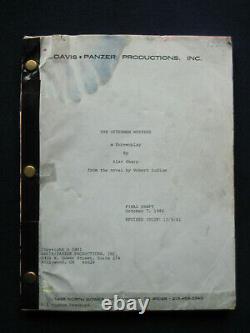 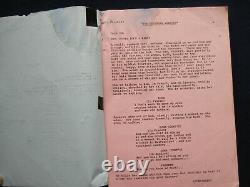 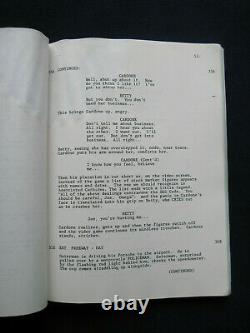 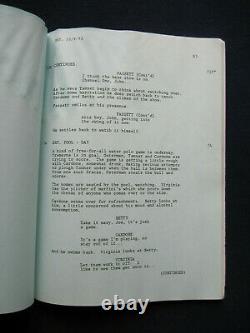 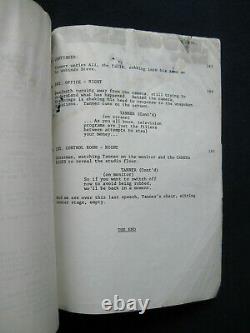 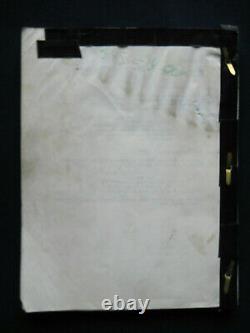 [THE OSTERMAN WEEKEND - THE FILM]. Based on the Novel by Robert Ludlum. Hollywood, CA: Davis / Panzer Productions, 1982. Original 131 page revised final shooting script with color rewrite pages dated October 7, 1982 and October 9. The Osterman Weekend was director Sam Peckinpah's last feature film - released about a year before his death in 1984, written by Alan Sharp, and based on the novel by Robert Ludlum, The film stars Burt Lancaster, Rutger Hauer, Chris Sarandon, Craig T.

Dennis Hopper, Meg Foster, and Helen Shaver. Good only copy with dampstaining most noticeably to the covers, but also to the interior, some tape reinforcement and repairs to the edges, some dust soiling, and edge wear. The film is set during the Cold War and tells the story of a controversial television journalist who is asked by the C. To persuade some Soviet agents to defect. Novelist Robert Ludlum was initially approached to write the script, but he was reluctant and the eventual production was plagued by one problem after another, with Peckinpah proclaiming that the producers had deliberately sabotaged his film.

The film was received with lukewarm critical responses with this from Roger Ebert: I sometimes enjoy movies that make no sense whatsoever, if that's their intention. But a thriller is supposed to hold together in some sort of logical way, isn't it? This item is in the category "Entertainment Memorabilia\Movie Memorabilia\Scripts\Originals\Unsigned".