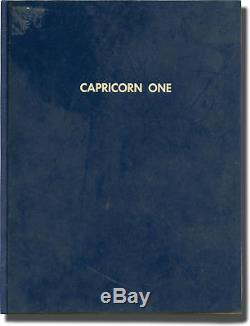 Robert (Gould) is a reporter investigating the questionable actions of NASA after a failed mission to Mars. The head of the mission forces three astronauts to participate in a fake Mars mission, including a fake landing, transmitted messages, and a fatal reentry. Shot on location in Arizona, Texas, and California.

All books noted as First Editions are also First Printings unless indicated otherwise. This listing was created by Bibliopolis. The item "Peter Hyams CAPRICORN ONE Original screenplay for the 1978 film 1976 #138393" is in sale since Saturday, March 23, 2019.