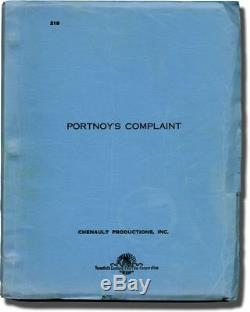 The fourth Roth novel (after "Goodbye, Columbus" in 1972) to be adapted to the screen, and the sole directorial effort for noted screenwriter Ernest Lehman "North by Northwest, " "The Sweet Smell of Success, " "Sabrina, " "West Side Story, " The Sound of Music, " and "Who's Afraid of Virginia Woolf? Alexander Portnoy (Benjamin), sees a therapist and goes on one long tirade after another about his family, his childhood, his sexual fantasies and desires, his problems with women, and his obsession with his own Judaism. Title page present, dated August 3, 1970, with credits for screenwriter Lehman and novelist Roth.

Since 1996, we have specialized in rare books and paper relating to twentieth century literature, genre fiction, the arts, and popular culture, with a particular emphasis on cinema. All books noted as First Editions are also First Printings unless indicated otherwise. This listing was created by Bibliopolis. The item "Philip Roth PORTNOY'S COMPLAINT Original screenplay for the 1972 film #135317" is in sale since Tuesday, January 8, 2019. This item is in the category "Entertainment Memorabilia\Movie Memorabilia\Scripts\Originals\Unsigned". The seller is "vanburenantiques" and is located in Baltimore, Maryland.