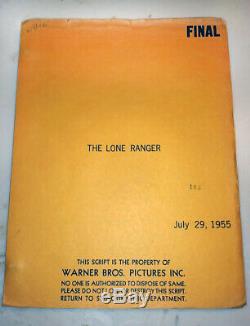 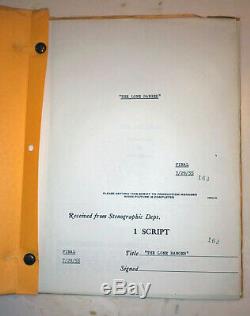 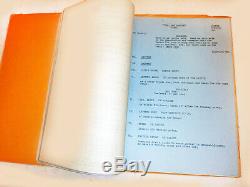 RARE Original 1955 Shooting Script of "THE LONE RANGER" (1956 feature film) starring Clayton Moore and Jay Silverheels. This copy labelled "FINAL" 7/29/55 is the shooting script for "THE LONE RANGER" feature by HERB MEADOW. The pages are white and blue throughout, and they appear to be the actual revision masters that came out of the typewriter.

"THE LONE RANGER" is a 1956 Western based on "The Lone Ranger" television series. It was the first of two theatrical features based on the popular TV show; the other was "THE LONE RANGER AND THE LOST CITY OF GOLD" (1958) which was Bonita Granville's last film appearance. She retired from the screen to marry Jack Wrather, oilman and Producer of the Lone Ranger franchise.

Set in the American Southwest, the territorial governor enlists the help of the Lone Ranger to investigate mysterious raids on white settlers by Indians who ride with saddles. Wealthy rancher Reese Kilgor(Lyle Bettger) wants to expand his land to include Spirit Mountain, which is sacred to the local tribes. The Lone Ranger realizes the natives wanted to keep settlers away so they would not discover the rich silver deposits on Spirit Mountain, while Kilgore wants to encourage a war between settlers and natives so that he can mine the mountain himself. Working with Chief Red Hawk, the governor, Tonto, a cowboy named Ramirez, and a humorous disguise, the Lone Ranger discovers the true identities of the raiders, prevents war, protects the tribal lands, and rescues Kilgore's daughter from captivity. The item "RARE Original 1955 Shooting Script of THE LONE RANGER (feature film) withC.

Moore" is in sale since Tuesday, May 7, 2019. This item is in the category "Entertainment Memorabilia\Movie Memorabilia\Scripts\Originals\Unsigned".