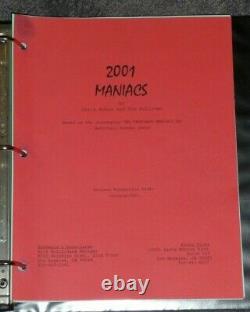 Super RARE Robert Englund Horror Movie 2001 MANIACS Production Crew Screenplay Script This is a revised production draft of the script from 2001. While the film was still in pre-production and preparing to film in a few weeks the production was struggling to finalize and secure budget financing. They subsequently were unable to do so and eventually had to shut down the whole production. The movie would many months later begin production once again with a new draft rewrite of the script, proper financing, recasting of some actors with a new film crew and were finally able to go back into production and complete the movie. This item is in the category "Entertainment Memorabilia\Movie Memorabilia\Scripts\Originals\Unsigned".