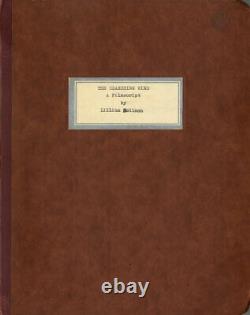 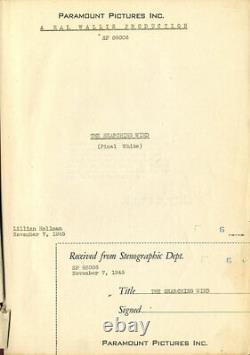 "Final White" dated November 7, 1945. One of a few screenplays entirely credited to Lillian Hellman, this one adapted from her play of the same name. This movie is about an American diplomat who reflects on mistakes he made in the years prior to World War II. Lillian Hellman was very politically involved both in left Wing and anti-Fascist causes in the 1930s and 40s, and this film reflects both of those aspects of her work. Not listed in OCLC (which only lists two post-production scripts); the HRC (Austin) lists three other variant drafts.

Title page torn and partly detached, some staining to last 30 or so pages, VERY GOOD. It must come back in the same condition as it was sent. AUTHENTICATION: My name is Walter Reuben. I have been collecting movie posters since 1978.

I have been a full-time dealer since 1982. Everything which I sell is fully researched and entirely guaranteed to be completely authentic and as described. A lifetime of experience goes behind every description of every piece which I offer. ABOUT ME: For further information, go to the ABOUT ME. This item is in the category "Entertainment Memorabilia\Movie Memorabilia\Scripts\Originals\Unsigned". The seller is "walterfilmusa" and is located in this country: US. This item can be shipped worldwide.