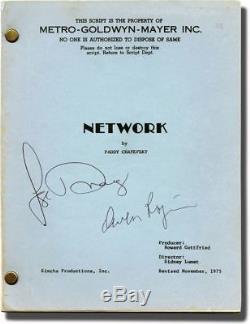 Description: Draft script for the 1976 film. SIGNED by starring actress Faye Dunaway, and cinematographer Owen Roizman, on the front cover in holograph ink. A highspot among director Sidney Lumet's many cinematic achievements, with an original screenplay written by Paddy Chayevsky and a host of major actors all working at the peak of their powers. A savage and very entertaining indictment of American television culture in the mid-1970s, portraying an overemphasis placed on newscasts to achieve higher ratings, and a powerful commentary about global media conglomerates.

Winner of 4 Academy Awards, and nominated for 6 others. Set in New York, shot on location in Canada and New York. Blue titled wrappers, rubber-stamped copy No. 45, dated November, 1975, with credits for screenwriter Chayefsky, producer Howard Gottfried, and director Lumet.

Since 1996, we have specialized in rare books and paper relating to twentieth century literature, genre fiction, the arts, and popular culture, with a particular emphasis on cinema. All books noted as First Editions are also First Printings unless indicated otherwise. This listing was created by Bibliopolis. The item "Sidney Lumet NETWORK Original screenplay for the 1976 film signed by #136010" is in sale since Tuesday, January 22, 2019. This item is in the category "Entertainment Memorabilia\Movie Memorabilia\Scripts\Originals\Signed".