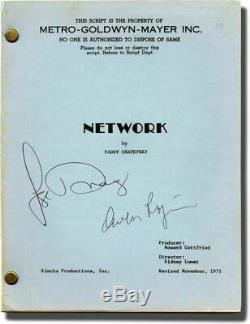 A savage and very entertaining indictment of American television culture in the mid-1970s, portraying an overemphasis placed on newscasts to achieve higher ratings, and a powerful commentary about global media conglomerates. Winner of 4 Academy Awards, and nominated for 6 others. Set in New York, shot on location in Canada and New York. Blue titled wrappers, rubber-stamped copy No. 45, dated November, 1975, with credits for screenwriter Chayefsky, producer Howard Gottfried, and director Lumet.

The item "Sidney Lumet NETWORK Original screenplay for the 1976 film signed by #136010" is in sale since Wednesday, July 24, 2019. This item is in the category "Entertainment Memorabilia\Movie Memorabilia\Scripts\Originals\Signed". The seller is "vanburenantiques" and is located in Baltimore, Maryland. This item can be shipped worldwide.