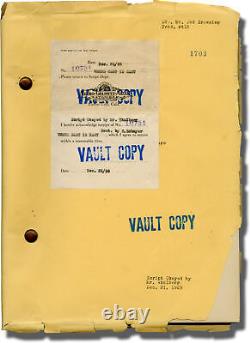 Description: Draft script for the 1929 silent film. Lon Chaney plays a (heavily-scarred) wild animal trapper whose daughter's upcoming marriage is threatened by the return of her femme fatale mother. The mother harbors bitterness to Chaney, and seeks revenge on him by attempting to woo her daughter's fiance, thwarted by a gorilla Chaney releases from a cage that gruesomely attacks her. Lon Chaney's penultimate silent film, and the last of his collaborations with director Tod Browning. The film was released with a Movietone music and effects soundtrack that could be played alongside the film. Tan titled wrappers, rubber-stamped copy No. 31, 1928, with credits for producer Irving Thalberg. Title page integral with the first page of the text, with credits for story writers Tod Browning and Harry Sinclair Drago, and screenwriter Waldemar Young. 75 leaves, with last page of text numbered 75. Pages about Fine, wrapper Good plus bound with two gold brads. Subject: 1920s Cinema, Actors, Asian Interest, Directors, Film Scripts, Romance, Silent Film. Royal Books is located in the midtown area of Baltimore, Maryland.

This listing was created by Bibliopolis. This item is in the category "Entertainment Memorabilia\Movie Memorabilia\Scripts\Originals\Unsigned". The seller is "royalbks" and is located in this country: US. This item can be shipped to North, South, or Latin America, all countries in Europe, Japan, Australia.