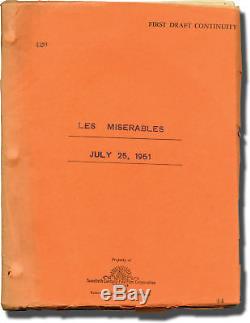 Notable adaptation of Hugo's 1862 novel, with Michael Rennie as Jean Valjean and Debra Paget as Cosette. Debra Paget and Robert Newton would reprise their roles for the Lux Radio Theatre hour-long adaptation in December of the same year.

An unusual adaptation, in that only the barest of the usual plot elements that typically make their way into the numerous adaptations of Hugo's classic are used in this film, while the remaining elements seem to be a concoction of wholly original characters and events. The AFI Catalog notes that the working title of the film was "Jean Valjean, " lending credence to the idea that the filmmakers were leaning toward a version of the story more focused on that character alone.

The eight-year-old Cosette, a well known character from the novel, is present in this draft, but her scene was cut from the final film. Orange titled wrappers, noted as FIRST DRAFT CONTINUITY on the front wrapper, rubber-stamped copy No. 420, dated July 25, 1951.

Subject: 1950s Cinema, Film Scripts, Films with Literary Sources, History, Romance. Royal Books is located in the midtown area of Baltimore, Maryland. Since 1996, we have specialized in rare books and paper relating to twentieth century literature, genre fiction, the arts, and popular culture, with a particular emphasis on cinema.

All books noted as First Editions are also First Printings unless indicated otherwise. This listing was created by Bibliopolis. The item "Victor Hugo LES MISERABLES Original screenplay for the 1952 film 1951 #131144" is in sale since Thursday, February 21, 2019. This item is in the category "Entertainment Memorabilia\Movie Memorabilia\Scripts\Originals\Unsigned". The seller is "vanburenantiques" and is located in Baltimore, Maryland.