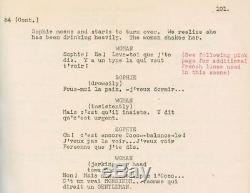 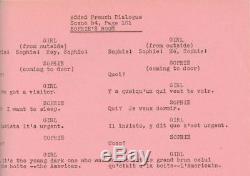 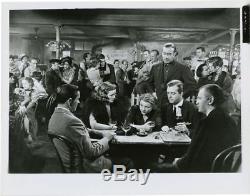 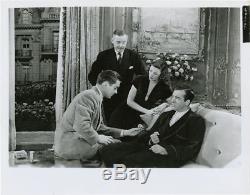 Somerset Maugham as the sole screenwriter, commissioned in mid-1945 by the film's original director, George Cukor, who was unhappy with Lamar Trotti's draft. Filming was delayed until March 1946 so that Tyrone Power, who was in military service until that time, could play the lead role. Maugham also wrote the screenplay for an adaptation of the 1946 film noir, "Somewhere in the Night, " and a screenplay for an anthology of his short stories, "Trio, " made in the UK in 1950 by Ken Annakin. Winner of the Academy Award for Best Supporting Actress, Anne Baxter, and nominated for three others, including Best Picture. Blue titled wrappers, noted as 7TH REVISED SHOOTING FINAL on the front wrapper, rubber-stamped copy No. 52, dated March 22, 1946. Title page present, dated March 22, 1946, noted as 7th Revised Shooting Final, with credits for novelist Maugham and screenwriter Trotti. 227 leaves, with last page of text numbered 167. Mimeograph, with blue revision pages throughout, dated variously between 3/28/46 and 7/13/46, and pink, yellow, and green pages of added French, English, and Hindustani dialogue (respectively). Pages Near Fine, wrapper Very Good plus, bound internally with three gold brads. Subject: 1940s Cinema, Academy Awards, Film Scripts, Films with Literary Sources, Literature. Royal Books is located in the midtown area of Baltimore, Maryland.

Since 1996, we have specialized in rare books and paper relating to twentieth century literature, genre fiction, the arts, and popular culture, with a particular emphasis on cinema. All books noted as First Editions are also First Printings unless indicated otherwise. This listing was created by Bibliopolis. Somerset Maugham RAZOR'S EDGE Original screenplay for the 1946 film #135179" is in sale since Tuesday, January 8, 2019. This item is in the category "Entertainment Memorabilia\Movie Memorabilia\Scripts\Originals\Unsigned".