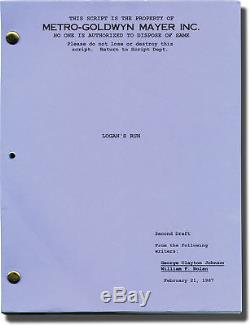 Description: First Draft script for an unproduced version of the film, dated February 21, 1967, the year of the source novel and nearly a decade prior to the eventual film's release. Nolan and George Clayton Johnson based on their novel. Perhaps the first of what would become many attempts to adapt "Logan's Run" to film. Two years later, a George Pal produced version, written by Richard Maibaum, fell through over budget and script concerned.

The script went through several more iterations, including one by "Soylent Green" author Stanley R. Greenberg, who added the idea of the Carousel. Ultimately David Zelag Goodman would write an entirely different version that would be used for the 1976 film, for which he is the only credited screenwriter. Blue titled wrappers, noted as Second Draft, dated February 21, 1967, with credits for screenwriters Johnson and Nolan. 123 leaves, with last page of text numbered 122.

All books noted as First Editions are also First Printings unless indicated otherwise. This listing was created by Bibliopolis. Nolan LOGAN'S RUN Original Screenplay for an unproduced film #139290" is in sale since Tuesday, January 22, 2019. This item is in the category "Entertainment Memorabilia\Movie Memorabilia\Scripts\Originals\Unsigned". The seller is "vanburenantiques" and is located in Baltimore, Maryland.