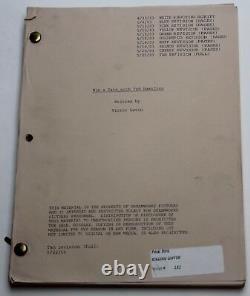 This is an original movie script from the 2004 movie, Win a Date with Tad Hamilton! This script is complete with all tan studio issued pages throughout inside and it is 115 pages long. Please view all of the pictures above carefully.

This script is in very good overall condition. Rosalee Futch is a grocery clerk living in rural West Virginia. But even a small-town girl can have big dreams, and Rosalee's is to someday--somehow--meet her big-screen idol Tad Hamilton. The somehow arrives in the form of a contest--the grand prize: a date with Tad Hamilton--and the someday is now.

Rosalee wins, much to the chagrin of her best friend and co-worker Pete, who is deeply, hopelessly--and secretly--in love with Rosalee. The Win a Date contest was cooked up by Tad's agent, Richard Levy, and his manager, also named Richard Levy, to clean up Tad's bad-boy image. Someone should have told them to be careful what you wish for. When Tad meets Rosalee and gets a taste of what he's been missing in the real world, he decides he wants seconds and moves to West Virginia, turning Rosalee's dream come true into a nightmare for Richard Levy, Richard Levy and, most of all, Pete.

We do our best to provide the widest selection of original movie scripts in the world. Whatever actor, producer, director, writer or specific film department you are looking for, we probably have a movie script related to the person you are looking for in some form or fashion. I know that there are a lot of items to search through, but there is definitely something for you. This item is in the category "Entertainment Memorabilia\Movie Memorabilia\Scripts\Originals\Unsigned".