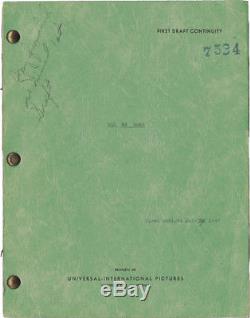 The carbon typescript from which the mimeograph copies issued by the studio were made, so noted in holograph pencil on the front wrapper in the hand of studio secretary Marion Pecht ("Copy from which we mimeod 1st draft"). Holograph pencil and ink corrections throughout, mostly to formal names on the preliminary pages and page numbers (which are re-numbered for the mimeo). One of the most successful adaptations of a Broadway drama to film during the 1940s, and based on one of the best and most unheralded plays by Miller.

A young Lancaster plays his son, who discovers the truth and makes the painful decision to bring it to light. Green titled wrappers, stamped FIRST DRAFT CONTINUITY on the front wrapper, rubber-stamped project No. 7534, and dated July 24, 1947 (corrected in holograph pencil from July 1, 1947). Title page present, with credits for playwright Miller and screenwriter Erskine. Pages and wrapper Near Fine, bound with three gold brads.

Subject: 1940s Cinema, Film Noir, Film Scripts, Films Based on Plays, Films with Literary Sources, Theatre. Royal Books is located in the midtown area of Baltimore, Maryland. Since 1996, we have specialized in rare books and paper relating to twentieth century literature, genre fiction, the arts, and popular culture, with a particular emphasis on cinema.

All books noted as First Editions are also First Printings unless indicated otherwise. This listing was created by Bibliopolis. The item "Arthur Miller ALL MY SONS Original screenplay for the 1948 film #122575" is in sale since Monday, April 8, 2019.