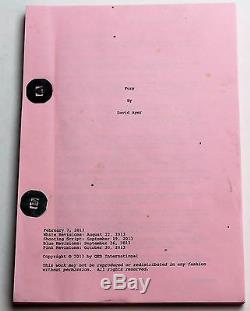 It is 92 pages long and has all pink colored pages inside and they are all in very good condition. Please view all of the pictures above carefully.

This script is pocket sized, which is used so that the actors can easily carry around their script without having to worry about the weight and size of a normal sized script. These small scripts were the actual scripts used by the actors for this film. This specific script that I have doesn't have name or any notes written inside, I'm not sure who used it during the making of the film. This POCKET SIZED script measures appx.

1945, in World War II Germany, the tough Sergeant Don'Wardaddy' Collier commands a tank and survives a German attack with his veteran crew composed of Boyd'Bible' Swan, Trini'Gordo' Garcia and Grady'Coon-Ass' Travis. He receives a rookie soldier Norman Ellison as the substitute for his deceased gunner and he tries to harden the youth along the way. Specializes in rare and collectible movie scripts.

Once you check off this little box it will allow you to search for a specific word that is contained in any of our listings' actual description. Here all of the original movie scripts will be categorized by decade, which will help you to narrow down what you are looking for by the year it was made. The item "FURY 2013 Movie Script Screenplay, Small Pocket Size Brad Pitt, Shia LaBeouf" is in sale since Wednesday, March 27, 2019. This item is in the category "Entertainment Memorabilia\Movie Memorabilia\Scripts\Originals\Unsigned".