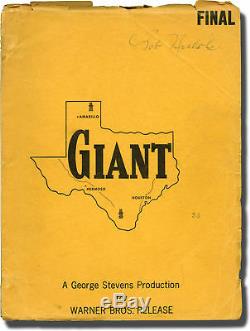 Description: Final Draft script for the 1956 film. Copy belonging to actor Bob Nichols, who played the part of "Mort'Pinky' Snythe, " with his name on the front wrapper, and notations throughout, in holograph pencil.

Based on Edna Ferber's 1952 novel. Bick Benedict (Hudson) and his wife Leslie (Taylor) are cattle ranchers in Texas, Leslie having been raised in Maryland and not used to the rancher's lifestyle. Bick's rival and former ranch hand, Jett (Dean), inherits a piece of land from Bick's late sister Luz (Baker), and strikes oil, all while taking a secret fancy with Leslie. The final film of James Dean's career, and the third of his legacy making starring roles after "East of Eden" (1955) and "Rebel Without a Cause" (1955). Dean died before production on the film was finalized and some of his lines were overdubbed by friend and fellow actor Nick Adams. Set in Texas, shot there on location and in Arizona and Virginia. Winner of an Academy Award, nominated for nine others, including Best Picture. Goldenrod titled wrappers, noted as FINAL on the front wrapper, rubber-stamped copy No. Distribution page present, dated 4/4/55, with receipt removed. Title page present, undated, with credits for producer Stevens, writer Ferber, and screenwriters Guiol and Moffat.

Since 1996, we have specialized in rare books and paper relating to twentieth century literature, genre fiction, the arts, and popular culture, with a particular emphasis on cinema. All books noted as First Editions are also First Printings unless indicated otherwise. This listing was created by Bibliopolis. The item "George Stevens GIANT Original screenplay for the 1956 film Bob Nichols' #137508" is in sale since Monday, April 8, 2019. This item is in the category "Entertainment Memorabilia\Movie Memorabilia\Scripts\Originals\Unsigned". The seller is "vanburenantiques" and is located in Baltimore, Maryland. This item can be shipped worldwide.