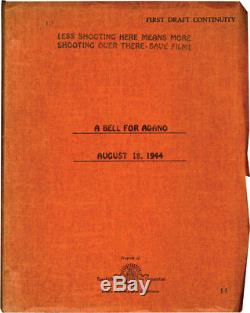 Description: First Draft Continuity script (pre-production) for the 1945 film. Adapted from the 1944 novel by John Hersey, based on the experiences of military governor Frank Toscani following the Allied invasion of Sicily. Copy belonging to producer Louis D. Lighton, with his holograph name to the front wrapper and his notations to the script. The story of a post-World War II village in which Allied troops assist residents in a transition away from Fascist rule.

The item "Henry King BELL FOR ADANO Original screenplay for the 1945 film copy #133284" is in sale since Thursday, February 7, 2019. This item is in the category "Entertainment Memorabilia\Movie Memorabilia\Scripts\Originals\Unsigned". The seller is "vanburenantiques" and is located in Baltimore, Maryland. This item can be shipped worldwide.