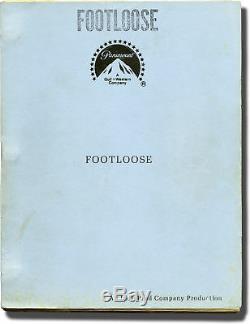 Description: Shooting script for the 1984 film. With a few holograph notations in ink and pencil throughout. A teenager moves to a rural town and comes into conflict with the local preacher and his "no dancing" ordinance. The film's soundtrack reached number 1 on the Billboard charts, and featured six Top 40 hits, including three Top 10 hits, two of which reached all the way to number 1.

This listing was created by Bibliopolis. The item "Herbert Ross FOOTLOOSE Original screenplay for the 1984 film 1983 #140449" is in sale since Saturday, March 23, 2019. This item is in the category "Entertainment Memorabilia\Movie Memorabilia\Scripts\Originals\Unsigned". The seller is "vanburenantiques" and is located in Baltimore, Maryland. This item can be shipped worldwide.