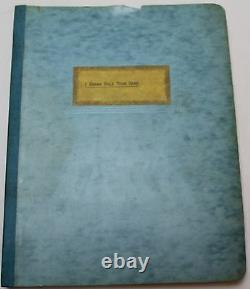 This is an original movie script from the Beatles movie, " I Wanna Hold Your Hand ". It has the original rare working title of the movie, Beatles 4-Ever!

It has a few pink colored revision pages inside. There are some signs of aging, please view the pictures above carefully. What an awesome piece of movie memorabilia. If they missed Beatles' first appearance in the U.

They would hate themselves for the rest of their lives! So they (six young girls from New Jersey) set off even though they don't have tickets for the show! The journey is full of surprises and misfortunes but the young ladies are determined to reach to their idols.. POSTER IS NOT INCLUDED, IT IS JUST BEING USED AS A VISUAL REFERENCE. Specializes in rare and collectible movie scripts.

The item "I WANNA HOLD YOUR HAND / Robert Zemeckis 1977 Screenplay, Beatles film" is in sale since Saturday, May 30, 2020. This item is in the category "Entertainment Memorabilia\Movie Memorabilia\Scripts\Originals\Unsigned".