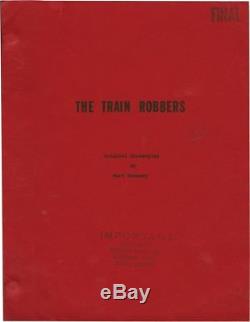 Fast-paced John Wayne train heist film, with Ann-Margret starring as a widow who needs to recover gold stolen and stashed by her late husband. She persuades a gunhand named Lane (Wayne) to ride into Mexico with her and recover the loot. Once in Mexico, they're tailed by a large group of bandidos, and a lone horseman who seems to know their every move. Set in Mexico and shot on location there. Red titled wrappers, rubber-stamped as FINAL on the front wrapper, with a credit for screenwriter Kennedy. Title page present, with a credit for screenwriter Kennedy. 120 leaves, several leaves photographically reproduced, remaining leaves mimeograph, with white, light green and pink revision pages throughout, dated variously between 2/21/72 and 5/16/72. Pages Fine, wrapper Near Very Fine, internally bound with two gold brads. Full pagination available upon request. Hardy, The Overlook Film Encyclopedia: The Western, p.

The item "John Wayne TRAIN ROBBERS Original screenplay for the 1973 film 1972 #123635" is in sale since Thursday, February 7, 2019. This item is in the category "Entertainment Memorabilia\Movie Memorabilia\Scripts\Originals\Unsigned". The seller is "vanburenantiques" and is located in Baltimore, Maryland.