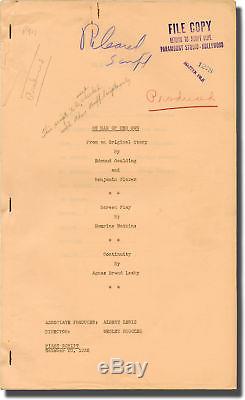 According to a HR news item on 4 Oct 1932, Lowell Sherman walked off the set after a pay dispute and was replaced by Wesley Ruggles. Hopkins quit the production in early Nov 1932, claiming the role was not suitable for her. Gable was on loan from M-G-M for this film. Gable and Lombard were married in 1939.

This was their only co-starring film. Gable plays a card cheat who has to go on the lam to avoid a pesky cop. While hiding out he meets lonely but somewhat wild librarian Lombard. The two get married after Lombard wins a coin flip and they move back to the city, where Gable continues his grifting ways unbeknownst to his new wife. Salmon self wrappers, rubber-stamped copy No. 1278 and MASTER FILE, dated October 20, 1932, with credits for story writers Goulding and Glazer, screenwriter Watkins, and continuity writer Anges Brand Leahy. Brief holograph notations on the front wrapper, mostly related to filing. Title page integral with front wrapper. PAGES leaves, with last page of text numbered 2 (the second page of a summary). Subject: 1930s Cinema, Film Scripts, Pre-Code Film, Romance.

Royal Books is located in the midtown area of Baltimore, Maryland. Since 1996, we have specialized in rare books and paper relating to twentieth century literature, genre fiction, the arts, and popular culture, with a particular emphasis on cinema. All books noted as First Editions are also First Printings unless indicated otherwise. This listing was created by Bibliopolis. The item "Wesley Ruggles NO MAN OF HER OWN Original screenplay for the 1932 film #130968" is in sale since Saturday, March 9, 2019.