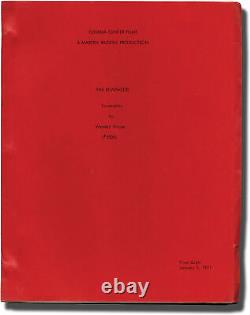 Description: Revised Final Draft script for the 1972 film. Based on a story by Steven W. A key Western vigilante film, John Benedict (Holden) leads a peaceful life on his ranch until a gang of Comanche Indians, led by a white man, murders his family and trashes his home.

He assembles his own posse of ruthless outlaws (guns-for-hire) to help him enact sweet revenge on the murderers. Shot on location in Mexico.

Red titled wrappers, noted as Final Draft on the front wrapper, and production No. 5008, dated January 5, 1971, with a credit for screenwriter Mayes.

Mechanical duplication, with blue, light blue, and pink revision pages throughout, dated variously between 1/18/71 and 3/16/71. Pages and wrapper Near Fine, bound internally with three gold brads.

Subject: 1970s Cinema, Film Scripts, Western. Royal Books is located in the midtown area of Baltimore, Maryland. Since 1996, we have specialized in rare books and paper relating to twentieth century literature, genre fiction, the arts, and popular culture, with a particular emphasis on cinema. All books noted as First Editions are also First Printings unless indicated otherwise. This listing was created by Bibliopolis. This item is in the category "Entertainment Memorabilia\Movie Memorabilia\Scripts\Originals\Unsigned". The seller is "vanburenantiques" and is located in this country: US.