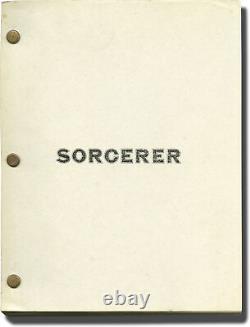 At 200 pages, this draft is 36 pages longer than the longest of the three we have encountered, meaning almost certainly that it is a First Draft or very close. The plot of William Friedkin's suspense thriller originated with the same Georges Arnaud novel that inspired Henri-Georges Clouzot's French suspense classic "The Wages of Fear" (1953). Roy Scheider, Bruno Cremer, Francisco Rabal, and Amidou play four men who, for various reasons, cannot return to their own countries. They end up in a dismal South American town where an American oil company is seeking out courageous drivers willing to haul nitroglycerin over 200 miles of treacherous terrain. The suspense is almost unbearable at times, even outdistancing the tension level of "The Wages of Fear" in certain scenes, in particular a famous set piece wherein one of the trucks must cross a rope bridge in the middle of the Amazon-and in the middle of a monsoon.