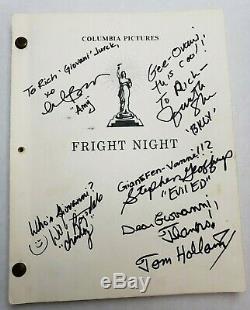 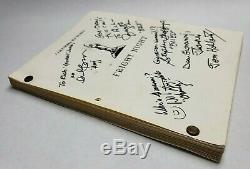 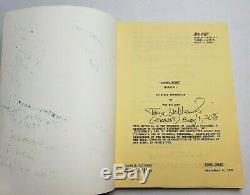 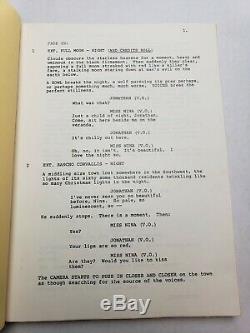 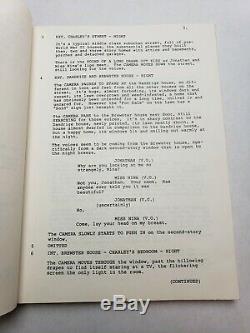 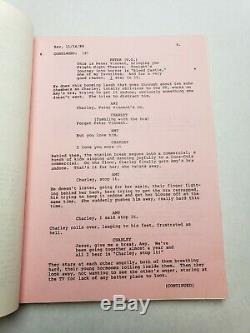 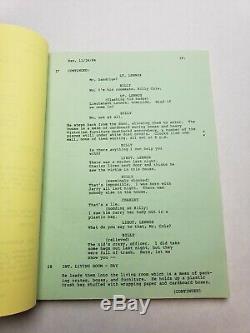 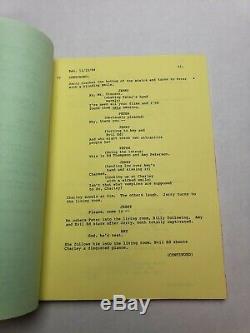 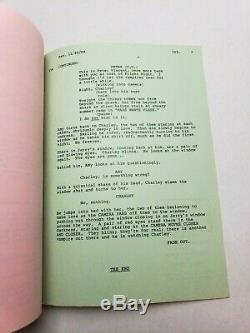 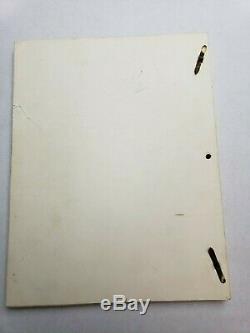 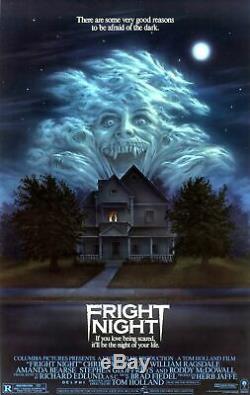 Script Last Dated: November 28, 1984. This is an original movie script used during the making of the 1985 Horror film titled, "Fright Night". This script has the original, Columbia Pictures, production cover.

The front production cover has autographs from a few of the main cast members personalized to someone named'Giovanni'. The Title Page inside is also signed by Tom Holland.

The price of this item is based on just the Original Movie Script itself, without the autographs. I do not have a Certificate for the Autographs so all of the autographs on this script are just a bonus, and are not reflected in the price. This script has multi-colored revision pages inserted throughout it inside and it is 103 pages long. Please view all of the pictures above carefully. This script shows the appropriate signs of aging for being used during the 1980's.

For young Charley Brewster, nothing could be better than an old horror movie late at night. Two men move in next door, and for Charley with his horror movie experience, there can be no doubt that their strange behavior is explained by the fact that they are a vampire and his undead day guardian.

The only one who can help him hunt them down is a washed-up actor, Peter Vincent, who hosts Charley's favorite TV show, Fright Night. THE POSTER SHOWN IN THE LAST PICTURE ABOVE IS NOT INCLUDED, IT IS JUST BEING USED AS A VISUAL REFERENCE.

We do our best to provide the widest selection of original movie scripts in the world. Whatever actor, producer, director, writer or specific film department you are looking for, we probably have a movie script related to the person you are looking for in some form or fashion. I know that there are a lot of items to search through, but there is definitely something for you. Once you check off this little box it will allow you to search for a specific word that is contained in any of our listings' actual description. Here all of the original movie scripts will be categorized by decade, which will help you to narrow down what you are looking for by the year it was made. The item "FRIGHT NIGHT / Tom Holland 1984 Screenplay, Chris Sarandon HORROR FILM" is in sale since Sunday, June 16, 2019. This item is in the category "Entertainment Memorabilia\Movie Memorabilia\Scripts\Originals\Unsigned". The seller is "themoviewizard" and is located in Van Nuys, California.