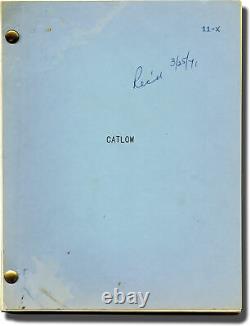 Notations throughout in holograph pencil. Euro-Westerns were made quickly and on tight budgets, and scripts for them are rare. Based on L'Amour's 1963 novel.

Catlow (Brynner) is a renegade outlaw determined to pull off a gold heist, after having served in the Civil War, where he met Ben (Crenna), a marshal tracking him down. The journey leads to Mexico, where Catlow may just change his ways. Shot on location in Spain. Blue titled wrappers, rubber-stamped copy No. 11, dated in ink 3/25/71. Title page present, dated March 10 and March 25, 1971, with credits for screenwriter Finch and novelist L'Amour. 112 leaves, with last page of text numbered 117. Xerographic duplication, with blue and yellow revision pages throughout, dated variously between 3/10/71 and 3/22/71. Pages and wrapper Very Good plus, bound with two gold brads.